Since this blog is dedicated to my memories, I think it is important to include the story about the day I got engaged.

My parents drove me and Shadow to Toronto, where we would be flying out of to get to Germany and I instantly broke down. It was SO sad separating with Shadow at the check-in because one, he wasn’t very fond of his crate and two, THOSE PUPPY EYES! It was going to be a long trip for him, eight hours to be exact, and I felt helpless not being able to be there for him and I was so sad we couldn’t just cuddle the whole way there. The only thing easing my mind was that the German airline we took, Lufthansa, is known for its amazing treatment of pets. They take them out to play during layovers, feed them, and have air pressure and temperature controlled cargo areas where the dogs are stored during the flight. But still, so heartbreaking.

We finally boarded the plane and I didn’t sleep for a second because I was too worried about Shadow. It made for an interesting, anxiety inducing, sleepless eight-hour flight.

After a connection in Frankfurt, me and Shadow finally made it to Bremen where Chris would be picking us up! Hallelujah!

He showed us around Bremerhaven – we ate the infamous fish and chips on a ship at the waterfront, walked down the shopping walking street in the rain, walked along the ocean and drove around the streets. It all felt surreal and a huge fuzzy dream looking back because I was so tired yet excited about our arrival.

We went back to the apartment to hang out, I may have fallen asleep for maybe twenty minutes and it was already time to get up and go meet Chris’ teammates and their girlfriends, fiancés and wives at a team dinner.

When we got back from dinner (ironically of good ol’ American ribs, my first dinner in Germany) I was exhausted but so happy to have our little family reunited – and nothing seems quite like home than a stack of dirty dishes that Chris had left in the sink. Classic Chris — You knew what you were doing that day and left a pile of dishes in the sink upon my arrival knowing how much I can’t stand a mess?! Hahaha.

I rolled up my sleeves to start cleaning the stack of dishes while Chris and Shadow wrestled in the hallway. It was good for Shadow to have his dad back, I can never get a rile out of him like Chris does.

Annoyed I had to stop the dishes mid-wash, I walked to the hallway and there was Shadow — with a shining diamond ring balancing on his nose.

My jaw dropped and to be honest I don’t really remember what happened or what Chris said because I was in quite shock. I do remember saying “Uh are you serious is this a joke” and laughing out my “yes”…was this real life?

Chris said he had the ring in his pocket all day but was too scared to ask when we were out and about all day.

There I was, deprived of any kind of sleep in over twenty-four hours but the excitement of it all woke me back up and we ended up going for a bike ride around our new neighborhood in the middle of the night – with beers in our basket. Chris 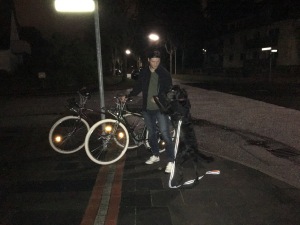 got us both bikes before I arrived to Germany and I’m so glad it was there waiting for us because that made our night even more special.

So that’s what happened on October 10th, 2017 in our first apartment on Talstraße 1A, (we’d eventually move to a different apartment because of shower draining issues). That tiny little hallway will forever hold a special place in my heart. That day, as stressful as it was with traveling with a dog, ended up being one of the best days of my life.

Today, June 29th, marks the official ONE YEAR mark until our wedding day and it feels more real than ever now. Here’s to three-hundred-sixty-five days of being Kirsten Eggleston and getting ready for the next chapter.

On my birthday, January 13, 2018, Chris agreed to do an engagement photo shoot with me. There is an amazing photographer in the Bremerhaven area, Carina Conrad, who had done photo shoots with other teammates and their families and so it was a no-brainer to ask her to capture our moments. She was amazing — these photos will always hold a special meaning to us since they were shot in the place we got engaged, a place unique to us.