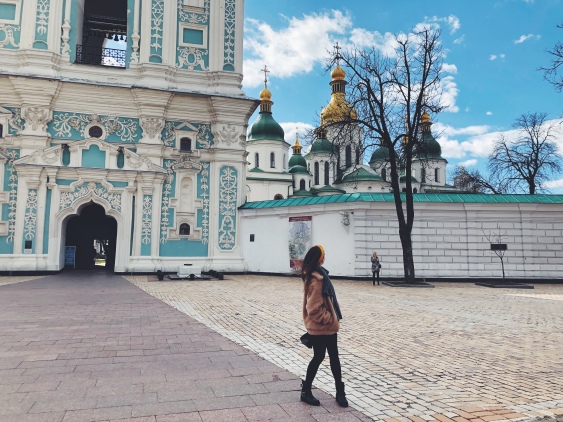 Of course we had to squeeze in one last trip before we fly home to the States for the summer. We based this choice solely on the fact that is was one of the cheapest flights flying out of Bremen, and after watching many YouTube videos of people who have made vlogs about Kiev, we knew we had to go. 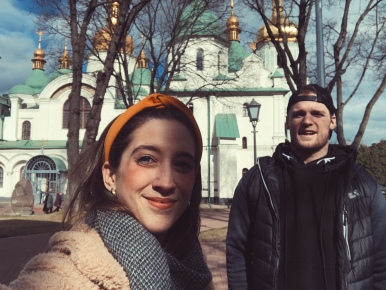 Kiev is the capital city of Ukraine and actually has 2.9 million inhabitants – pretty big for a city you never heard about! It is known for its architecture (look at these churches) and deeply rooted history that dates back to the 11th century 😯 We were in absolute awe just looking at Saint Sophias, Saint Andrews and Saint Michael’s Cathedrals. With a little bit of the typical Russian architecture and gold domes, it was something that we had never seen in person before. In fact, this is probably as close to Russia as we’re going to get.  I had to brush up on my Cold War history to realize that Ukraine officially gained independence from the USSR in 1991 – that isn’t so long ago! Ukraine is fairly “new” to being a free country and I truly felt their independent spirit everywhere we went.

It started with the first night we got there – the streets are so huge that you need to take underground tunnels in order to cross the street. Every tunnel we went through that night while exploring, there was someone playing live music. Walking down the main street, Khreshchatyk, there were a bunch of crowds surrounding street performers. On Sundays, they completely shut down Khreshchtyk Street from any cars. The huge (and very busy might I add) street is free from vehicles, so people can roam the as freely as they want. I can’t tell you how many people were out

dancing and playing instruments along the street that day. Every bar we went to – live music. There was a noticeably huge population of young people here – and their fashion was well, interesting. I imagine that growing up in this generation in Ukraine is the most freeing of them all. Generations before had to conform to a society, so perhaps they are encouraging their offsprings to be as free as the want to be. Teenage and young adult men weren’t too afraid or embarrassed to be break dancing for people in the street. Large crowds of young teenagers were everywhere with their speakers, blasting music to their either choreographed or freestyle dances. The older people in their head scarves and dull clothing stood by and observed with smiles on their faces. I truly admired the young Ukrainian generation for that. In the

States, it is rare to find young people, who aren’t enrolled in dance class, just feel free enough to be themselves in front of others or think they aren’t “too cool” to just dance and let go. I’ve never seen something like this in all the places I’ve been and it is something that I will remember forever. The Ukrainian culture is truly so different than a lot of countries in Europe and very much different from the one I grew up in.

Another interesting factoid about Kiev is that it isn’t far away from the Chernobyl disaster – the nuclear power plant explosion that happened back in 1986. So, we walked through the Chernobyl National Museum to learn a little more and see the effect it had on the Ukranians. Now a complete deserted area, Chernobyl’s nuclear catastrophe ended up costing so many innocent lives, tragic health effects and an environmental emergency that they are still having to contain today. While the Cold War wasn’t a direct physical war, it still took many lives in the dangers it brought to civilians.

Now onto the food. Chris and I loveeeed the food in Poland, so we were excited to go to Ukraine where we could find a lot of similar dishes. They had the pierogies (that they just call dumplings in English), cabbage rolls and borsch at every meal. We literally ate the same stuff every day. This stuff is my kind of comfort food! A specialty of Kiev is the ONE SHOP place to go get these hot dogs in a hot and steamy fried-dough-ish bun. Literally costing .25 euros, these Ukrainian hot dogs known as perepichka called for a super long line at all hours of the day. The two women in the little box stand are on pilot mode, taking money and handing out the dogs all day.

Ukraine is one of the cheapest places to visit. We thought Poland was cheap but Ukraine was even cheaper! 1 euro is 30 UAH – everything we bought, was divided by 30 and it all ended up being a few euros. First night of dinner? 7 euros. 25 minute Uber ride across town? 1.25 euros. UBER. 25 MINUTES. 1.25 EUROS! (Which reminds me how CRAZY Ukrainian drivers are!)

It felt like we were a little stuck back in the 90s – it was rare to see a new fancy car on the road, although our Ubers had older cars, the insides were immaculate, they love to embrace their history and the decor in the restaurants we went to reflected that, the trams and buses looked worn out and beaten down, not a Starbucks in sight (and we had some of the best coffee ever) and the elderly really are the cute little babusya’s we stereotypically think about!

This was a once in a lifetime trip for Chris and I and it was cool for us to experience a city that has literally ZERO tourists/tourist traps. Not many people we interacted with were confident with their English, they say they know it “so-so”, but in a few years time, I am sure tourism and tourist accommodation will be available in Kiev (all the signs were in the Ukrainian alphabet and it was Важко зрозуміти). I hope all the best things for this city, to give it a little boost and a bigger name on the map and appreciation, but at the same time, would hope that it never changes and that the people of Kiev keep on doing what they are doing because it is so cool and unique compared to the rest of the world. Keep doing you, Kiev. ✊🏼