Although it has been over two months of us being away, I realized I never ‘officially’ announced to my family that we were headed back to Germany for this new hockey season. Back in April, Chris got a call from his agent that another team in the league he was playing in before, the DEL, was interested. We were both ecstatic to hear the news. We make it known how much we love Germany and how much fun we have had the past two seasons being able to live here, fitting in with the culture, learning the language, meeting new friends and of course, being able to explore. Getting the chance to come back to a country that we love has been an absolute dream.

So, here we are in Iserlohn, located in the rolling hills of Western Germany, known as the “sauerland” in the state of North-Rhine-Westphalia. Fun fact is that hockey was brought to this town by Canadian soldiers who were deployed here after the Korean War and they built the town’s first rink. It was able to band together both the young Canadian boys itching to play some hockey and the local Germans by introducing them to the sport of both skating and hockey. I really didn’t know much about Iserlohn before moving here besides the fact that this is where the Iserlohn Roosters played and it wasn’t too far from Bremerhaven. But, now we are officially a Rooster family and I have to say, I have fallen in love with my surroundings. I can honestly say I’ve never lived in a prettier place!

We live in a traditional German house and every morning we wake up looking out to the most beautiful landscape in front of us. Some days there are blue sunny skies and other days it is grey and raining, but no matter what, the green grass and big tree-filled hills make our windows look like they are paintings. Also, not to mention, there are horses located in the fields around us and they are always fun to watch and look at. I have never in my life been able to live this “country” life and I have to say I really am loving it. Every morning I take Shadow on a walk through the loop around our fields and it is the most blissful half-hour I now need to

start my day. Usually, I pop in my headphones and listen to a podcast when taking Shadow for walks, however, here, it’s a rare occurrence that I actually have them in. I love the peace and quiet that morning brings and to hear the birds chirp and horses neigh in the distance actually makes me SMILE. There is so much nature surrounding us that I feel like I am living someone else’s life because I am totally not used to it and I am becoming a little Snow White 😜. The only freaky things are the bats that fly around at night (that I am now used to) and one creepy crawler poisonous black and yellow lizard that creeps around our streets at night sometimes. Me, Chris and friend/teammate/neighbor Mike call it the “night king” because it’s scary as hell, deadly(?) and we never know when we are going to see it. The fall weather has been pretty mild so far (unfortunately lots of rain) but for the most part it is still pretty green where we are. Maybe the big change in colors will come in November.

Chris and I are always cooking dinner at home, wait let me re-phrase that. Chris is always cooking dinner at home (I’m more of a crock-pot dinners and homemade soups kind of cook) and while he slaves away at the stove, I usually am staring out the window at the amazing sunsets over the hills and reminding myself how grateful I am to be here and still pinching myself that we are living in Germany.

As I write this I feel like a total lunatic as if this is some fairytale, because it is not always rainbows and butterflies, but there is something about living on this piece of land that makes me happy and every time we pull up to our house I’m reminded of how much I am going to miss this someday. While for the most part our day-to-days are quite boring – Chris goes to the rink, I take Shadow on a walk, sit on my laptop working most of the day, Chris naps, we get hungry, go to the grocery store, make dinner, eat dinner, watch whatever TV series were into, take Shadow for a night walk, go to bed, repeat. It’s those days of adventure that keep me going 😅 and luckily Chris’ November break is coming up very soon and I’m really looking forward to the next place I get to explore with him.

Shadow is also loving life here. There is so much space for him to run around and he is very rarely ever on a leash. The main lake here is called the Seiler See and we’ve taken him there to swim a few times, although he also is just as happy splashing around the creek on one of the walks we take. The only downfall about living here for Shadow is the horses. He is either very intimidated by them or jealous of the attention we give them, but he always pretends he doesn’t see them or speeds up his pace to get past them fast. If Chris and I stop to stare at the horses, Shadow is usually standing several feet away, waiting for us to leave. He always comes up right against my legs after I have said hallo to the horses to make sure I am okay. 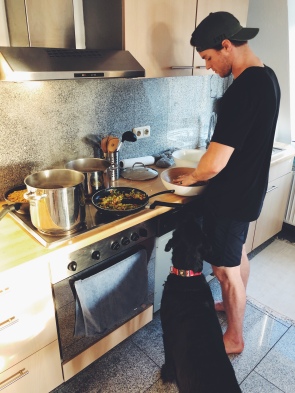 Another perk to living here is that although we are living a farm life, we aren’t far away at all from civilization. We are only a five-minute drive to the rink and a little bit more to the downtown area. There are grocery stores everywhere and we usually make our way around town going to all of them. When it comes to shopping, there is a cute walking street area with some main stores but if I’m feeling like a retail therapy session is needed, I just drive to Dortmund about a half-hour away. Christmastime will be fun since we will be able to drive to bigger cities markets like Düsseldorf and Cologne that aren’t too far away either. There are a bunch of teams near the cluster of Iserlohn that also makes a huge difference when it comes to Chris’ road trips. He usually is never gone for too long and sometimes, is back before midnight on a game-day which I am totally not used to! As for the new arena ‘Eissporthalle Iserlohn”, it was weird to get used to since the set up is different than Bremerhaven, but the fans are still just as loud and show up every game.

Since being here we have gone on a couple quick day trips to Münster, Essen, Oktoberfest in Stuttgart, Amsterdam for the John Mayer concert, I took a solo trip back to Bremerhaven for a good friend’s baby shower and only a long list more for places to go for the rest of the season, including some castles nearby. I am back in the swing of things and will definitely keep better tabs on where we have been. It was an INSANE summer for us back in Buffalo and when Chris had to leave to come back to Germany on July 28th, I cried. It mostly was because he was packing his things and I wouldn’t be joining him and Shadow for about three weeks, but I would be lying if it also wasn’t because Mason Ramsy’s “Twang” song was playing in the background – just reminding me of the sweet summer we had with friends and family surrounding and celebrating us! I was sad that the summer we got married was coming to an end because it really was the best of all. But, now that we are in total autumn mode and we have been back to our regular routine in Germany, I am just as happy. This is when life feels right to us, even if hockey interrupts a majority of it 😏.

So, I am signing off for now, but I hope that this update was sufficient enough for those that wanted to hear it. I will leave you with the view that I am seeing right now from my desk – auf wiedersehen & GO BILLS! (Yes I stay up late on Sundays and haven’t missed a game ❤️💙)